ISOTeam recently caught my attention with a surge in price, accompanied with volume.

Based on Chart 1 below, ISOTeam has been trading in a tight range of $0.375 – 0.405 since 30 Aug 2016. ISOTeam closed unchanged at $0.395 on 9 Jan 2017. All the exponential moving averages (“EMAs”) are turning higher with 20D EMA on the verge of forming a golden cross with 50D EMA. Amid positive placed DIs, ADX has turned higher from 17 on 27 Dec 2016 to 30 on 9 Jan 2017, indicative of a trend. OBV has strengthened, together with other indicators such as RSI and MACD. RSI closed at 61 on 9 Jan 2017. It is noteworthy that RSI has touched around 86 in July and August 2016 before it declined. A sustained break above $0.405 with volume points to an eventual measured technical target of around $0.435. Conversely a sustained break below $0.375 with volume points to an eventual measured technical target of around $0.345. As the trend continues to be up (unless proven otherwise), the odds of an upside breakout outweigh that of a downside breakdown.

Chart 1: ISOTeam on the verge of a potential bullish chart breakout 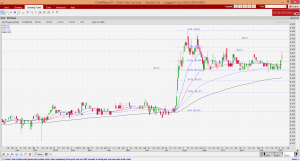 Based on Bloomberg, average analysts’ target price is S$0.540. Estimated dividend yield is around 2.5%. Based on my research, it is noteworthy that since Aug 2016, there has not been any updated analyst reports on ISOTeam. With today’s contract wins of S$23m (click HERE for the announcement), my guess is that there are likely to be some updated analyst reports, hopefully with higher target prices.

As ISOTeam has jumped 30% in the past 5-6 months, it may be prone to profit taking.

2. Basis of this write-up stems from its technical outlook only

The above write-up is clearly based on its technical chart. For fundamentals, readers should refer to analyst reports and the company’s financial results and all related company announcements. I have copied some links here for your reference:

P.S: It is apparent that the write-ups on ISOTeam above are pretty dated, hence with today’s contract wins, my guess is that there may be some updated analyst reports soon, hopefully with higher target prices.

Although ISOTeam’s liquidity has improved substantially since my first write-up, its average 30D and 100D volume amount to 507K and 738K shares respectively. Thus, it is still not a liquid stock.

In a nutshell, this write-up focuses more on ISOTeam’s chart setup. ISOTeam seems to be on the verge of a potential bullish chart breakout. A sustained break above / below $0.405 / $0.375 points to an eventual measured technical target $0.435 / $0.345 respectively. The odds of it staging an upside breakout outweigh that of a downside breakdown.