The animal spirits seem to have finally descended on our Singapore market! Our STI is one of the best performing indices with a blistering 6.4% year to date return. Our FSTS ST Small Cap Index has returned 3.8% year to date. I have highlighted four charts which (I feel) deserve attention. Do note the caveats below.

With reference to my write-up on Midas dated 3 Feb 17 (click HERE), Midas’ inverse head and shoulders pattern seems to be confirmed with the decisive upside break above its 200D exponential moving average (“EMA”) and neckline of around $0.230 – 0.240 with volume expansion (See Chart 1 below). With yesterday’s close of $0.255, this was the first time in 16 months which Midas can close higher than its 200D EMA for the 3rd consecutive day. 50D EMA is on the verge of forming a golden cross with 100D EMA at $0.230. Amid positively placed directional indicators (“DIs”), ADX closed at 29 on 8 Feb 2017. A sustained break above $0.240 points to an eventual technical target of $0.275. This remains valid. A sustained break below $0.230 negates the bullish chart setup. 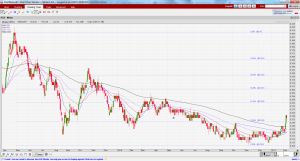 Chart 2: Sapphire on the verge of a likely breakout 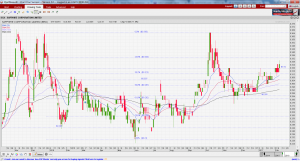 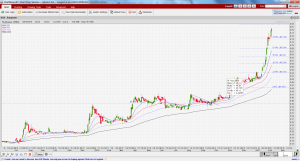 Based on Chart 4 below, Terratech has been trading within $0.042 – 0.048 for the past four plus months. As of today, it has broken out of $0.048 with a strong volume of 42.6m shares traded. This is the highest volume since 10 Jun 2016. All the EMAs are rising with golden crosses. For example, 20D & 50D EMA have crossed above 200D EMA. OBV closed at the highest level since 10 Jun 2016 which signifies accumulation throughout the past four plus months. Amid positively placed DIs, ADX closed at 50, indicative of a trend. A sustained breakout above $0.048 points to an eventual measured technical target of around $0.054. A sustained break below $0.048 negates the bullish setup of the chart. 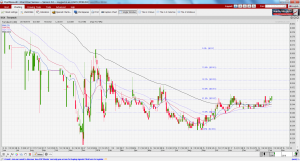 Before we get all excited about the above charts and their potential developments, readers should be aware of the following noteworthy points:

At the point of doing this write-up on 9 Feb 2017, I only have the chart information as of 8 Feb 2017 data. This is because I am using end of data by Chartnexus.

As most of you are probably aware, technical chart reading may not be very accurate as some of the small to mid-cap stocks are not highly liquid.

c) Overbought levels can stay overbought for some time

As I have previously pointed out before, overbought levels can stay overbought for some time. Furthermore, there may be reasons known to the market but unknown to me, which may have caused the strong price rally for Sunpower.