Is GEAR a laggard coal play? Let’s take a look at some of the possible investment merits and risks. 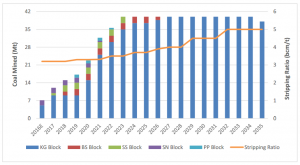 According to KGI report, they cited GEAR’s coal is broadly similar to PT Adaro Energy Tbk’s Ecocoal, but with a slightly lower calorific value. Chart 2 shows the trend of the various coal prices. It is apparent that the price for Ecocoal (see the lowest line in Chart 2) has rebounded sharply since May 2016. KGI postulates that there is a 3 month lag between GEAR’s average selling price vis-à-vis Ecocoal due to the nature of its contracts. Thus, the upcoming 4QFY16F and especially 1QFY17 are interesting quarters to watch out. 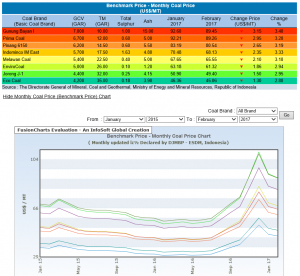 GEAR has total reserves of 780m tonnes and is the 4th largest coal player by reserves in Indonesia. Having a large reserve is advantageous as it allows GEAR to tender long term contracts of 20-25 years to supply coal to power plants (smaller competitors are not able to do that).

GEAR has excellent infrastructure and logistic capabilities. For example, GEAR’s BIB mining sites are located on average 25km away from its port. Secondly, GEAR’s conveyor belts extend 800m into the Java Sea. This allows direct loading onto large barges which will otherwise be subject to tidal conditions should GEAR load at riverfront. To a certain extent, these factors contribute to how GEAR can reduce its operating costs over time (See Chart 3 below)

Diversified customer base supported by demand

Based on Chart 4 below, GEAR’s sales are broadly split between domestic and export sales. Based on FY15 sales, the top three countries, namely Indonesia, China and India comprise of 55%, 25% and 19% respectively.

Demand from the aforementioned countries seems to be stabilising or increasing. For example, based on a Bloomberg article dated 7 Nov 2016, China expects to increase its coal power generation capacity up to 19% over the next five years. In Indonesia, the development plan of 35,000 MW power project will open new opportunities for the players in the coal industry to support the power plants projects.

GEAR is approximately 87% owned by PT Dian Swastatika Sentosa Tbk which belongs to the Sinar Mas Group. This lends assurance to investors to a certain extent. Moreover, this allows GEAR to supply coal to the Sinar Mas group of companies.

Based on the independent business valuation report prepared by Jones Lang LaSalle (“JLL”), the 66.9998% equity interest of BIB coal concession translates to around US$1.95b as at 31 Aug 2016 (S$2.72b, using the exchange rate USDSGD:1.40). This valuation is noteworthy on several fronts, namely

It is apparent that coal price and the demand for coal are important factors that can adversely affect GEAR. Although GEAR has relatively low cost of production to breakeven, a significant reduction in average selling price will have an adverse impact on its profitability. Based on an article on Golden Energy dated 19 Dec 2016, GEAR’s management said that every US$1 increase in the price of coal translates to an addition US$13m to the company’s pretax profit, assuming production of 14m tonnes per year.

Coal mining companies have to apply for several permits and licences. These require approvals from the various government agencies and any delay or disapproval may affect the mines’ production schedules.

Based on The Edge article dated 20 Feb 2017, Sinar Mar has an agreement to sell its stake in Berau Coal Energy (“Berau”) to GEAR. Although this will propel GEAR to the 3rd position in terms of largest reserves, Berau has significant debts and it has to produce at US$48-50 / ton to break even. Hence, there may be potential execution or / and integration risks should GEAR acquire Berau.

This write-up is based on my preliminary understanding and also on company’s announcements, as well as, KGI report. As of now, I have not met GEAR’s management yet.

KGI is the only broker covering GEAR. As GEAR just started trading in Singapore since 12 Dec 2016, it may take some time for other analysts to research and cover GEAR. This is because some of them may wait a few more months to assess whether coal prices have stablished / reached bottom last year. Others may wait for GEAR to release its 4QFY16 results (likely around end Feb).

Based on Chart 5 below, GEAR has been forming higher lows recently. 21D exponential moving average (“EMA”) has started to move higher. Indicators such as OBV, RSI and MACD are strengthening. However, the overall chart still looks a tad bearish, especially when its 50D, 100D and 200D EMA are trending downwards. Chart will look more positive if it can break above $0.590 on a sustained basis. 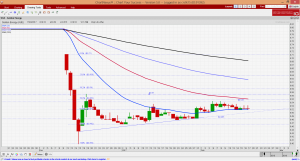 Notwithstanding the +24% in Geo Energy’s share price, GEAR seems to be a laggard play in the coal sector. GEAR’s upcoming results should be something to watch out for, especially with the surge in coal price, coupled with their planned increase in coal production volume in 2017. However, readers should be cognisant of the various risk factors, such as political / regulatory risk, decline in coal price etc. which GEAR faces. My personal view is that if GEAR continues to deliver on its results, coupled with a supportive macro outlook on coal price and demand, it is a matter of time before the investment community takes note.

This is just a brief description of GEAR. Readers are advised to refer to GEAR’s website (click HERE), the announcements on SGX and KGI research report for more information.