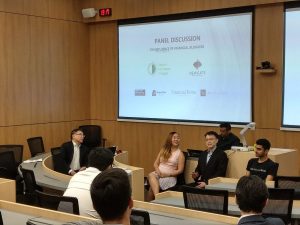 With reference to the above, this is my first panel speaking, in the capacity of a financial blogger. Many thanks to Marcus, President, Institute of Public Relations of Singapore and Clarence, Director at Newgate Communications for inviting me to this informative seminar. I have also learnt much from fellow experienced financial bloggers, Dinesh (Dollars and Sense); Dawn (SG Budget Babe) and Financial Horse.

These are some of the key takeaways (click HERE) from the panel discussion.

Do take a look at my blog (click HERE) for write-ups on the markets and specific stocks.

P.S: Readers who wish to be notified of my write-ups and / or informative emails, can consider signing up at http://ernest15percent.com. However, this reader’s mailing list has a one or two-day lag time as I will (naturally) send information (more information, more emails with more details) to my clients first. For readers who wish to enquire on being my client, they can consider leaving their contacts here http://ernest15percent.com/index.php/about-me/

Readers who wish to know my market outlook on Morning Express 晨光第一线 can click HERE and scroll the time bar to 13:45 to view it.

I am pleased to say that I am interviewed by The Straits Times “Me&MyMoney” Section, published this morning. Readers who wish to know more about me and how I progress along this investing / trading career can take a look here.

Readers who wish to know my market outlook on Morning Express 晨光第一线 can click HERE and scroll the time bar to 12.30 to view it.

After being quoted on several print media, my comments were finally sought and published on Today. This is another positive development.

This was another breakthrough. On 11 Dec, it was my 1st TV appearance on Channel NewsAsia  http://www.channelnewsasia.com/news/business/bhg-retail-reit-raises/2340216.html

It is my pleasure to announce my first article contribution to BTInvest which is the Personal Finance and Investment Arm of The Business Times. Going forward, there will be regular articles to be reproduced on BTInvest.

Please click the link here to view the article.

Have a good week ahead.

My opinion on the General Election and its impact on our Singapore stock market (Lianhe Zaobao, 14 Sep 15)

Disclaimer
The information contained herein is the writer's personal opinion and is provided to you for information only and is not intended to or nor will it create/induce the creation of any binding legal relations. The information or opinions provided herein do not constitute an investment advice, an offer or solicitation to subscribe for, purchase or sell the investment product(s) mentioned herein. It does not have any regard to your specific investment objectives, financial situation and any of your particular needs. Accordingly, no warranty whatsoever is given and no liability whatsoever is accepted for any loss arising whether directly or indirectly as a result of this information. Investments are subject to investment risks including possible loss of the principal amount invested. The value of the product and the income from them may fall as well as rise. You may wish to seek advice from an independent financial adviser before making a commitment to purchase or invest in the investment product(s) mentioned herein. In the event that you choose not to do so, you should consider whether the investment product(s) mentioned herein are suitable for you. The writer will not, in any event, be liable to you for any direct/indirect or any other damages of any kind arising from or in connection with your reliance on any information in and/or materials appended herein. The information and/or materials are provided “as is” without warranty of any kind, either express or implied.  In particular, no warranty regarding accuracy or fitness for a purpose is given in connection with such information and materials.