As I correctly pointed out on 21 Mar, Mon 907am to my clients via email to alert them to consider taking profit on our local banks, the three local banks have fallen -3.9% – 6.4%, vis-à-vis a 3.4% drop in the STI. It is noteworthy that 18 Mar close was coincidentally a recent high for STI.

For the past two weeks despite the lackluster market, it has been an exciting and profitable fortnight for me as I have increased from 0% invested on 24 Mar 2016 to 90+% invested and back to 0% invested as of 8 Apr.

Read on to find out more.

Just to recap what I have mentioned on 24 Mar 2016 (see here), I wrote “S&P500 recent rally was accompanied with weaker than average volume. The eventual measured technical target of around 2,080 remains valid as long as 1,970 is not broken. It is noteworthy that a break below 1,950 on a sustained basis negates the bullish tinge in the chart.”

Chart 1: S&P500 turned volatile in the past four trading days 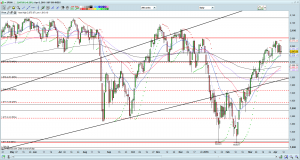 Based on Chart 2 below, it is similar to the prognosis two weeks ago. Hang Seng seems to have slid back to the upper trend line. ADX dipped lower from 17.5 on 24 Mar 2016, to close at 13.6 on 8 Apr 2016, indicative of a lack of trend. Both RSI and MACD have weakened further in the past two weeks. Hang Seng is likely to trade within a range of 19,500 – 20,950 in the next two weeks. A sustained break below 19,500 negates the slight bullish tinge in the chart 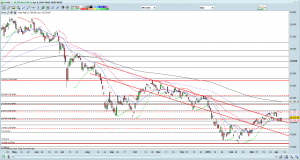 On 24 Mar 2016, I wrote that “Although the medium term trend seems to be on an uptrend, I noticed that our local banks and Singtel seem to be consolidating their recent hefty gains. It is likely that STI may consolidate between the range of 2,700 – 2,920 in the next two weeks.”

–> As I correctly pointed out, our local banks and Singtel have declined between -0.6% to -2.9% for the past two weeks, vis-à-vis a 1.4% decline in the STI. Clients should not be surprised as they would have received my email on 21 Mar, Mon 907am to inform them that our local banks have surged since 12 Feb and they should consider taking some profits. It is noteworthy that 18 Mar close was coincidentally a recent high for STI. (See Table 1 below)

Table 1: Banks’ and Singtel’s price change for the past two weeks

Source: Ernest’s compilations as of 8 Apr 16

Chart 3: STI continues to consolidate with a downward bias 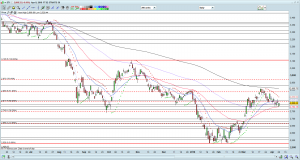 Chart 4: FSTS – may consolidate with a downward bias 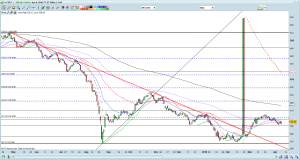 In the next two weeks, I am likely to buy a couple of stocks but am unlikely to exceed 50% invested as I am cautious for the next two weeks. (My clients will be duly informed on new stocks which I have entered and any significant portfolio change.) Besides my usual reasons which I have written in my previous market outlook write-ups, I like to add the following:

a) U.S. 1Q corporate results commences next week. According to FactSet estimates, S&P500 earnings are expected to slump 8.5% (Ex energy, 3.7% decline), the worst quarterly period since 3Q2009. Furthermore, if the estimates are accurate, this will mark the 1st time in seven years that S&P500 has registered four consecutive quarters of decline. Examples of corporate earnings release this week are Alcoa (Mon), JP Morgan (Wed), Bank of America (Thurs) and Citigroup (Fri).

b) Some important data to watch are the Fed’s unexpected meeting to discuss rates on 11 Apr, Mon; IMF economic outlook on Tues and China’s GDP on Fri.

As mentioned previously, readers who wish to be notified of my write-ups and / or informative emails, they can consider to sign up at http://ernest15percent.com so as to be included in my mailing list. However, this reader’s mailing list has a one or two-day lag time as I will (naturally) send information (more information, more emails and more details) to my clients first. The above email on 21 Mar 2016 to alert clients to consider taking profit on our local banks was a case in point. For readers who wish to enquire on being my client, they can consider to leave their contacts here http://ernest15percent.com/index.php/about-me/