GSS Energy’s (“GSS”) recent share spike and chart action caught my attention. GSS has surged 67% from $0.048 on 1 Sep 2016 to close $0.080 on 10 Oct 2016. It has just moved above its 200D exponential moving average (“EMA”) for the first time in 16 months! Furthermore, GSS announced that its subsidiary was awarded a KSO contract from Pertamina for oil production for the Trembul Operation Area. In view of the chart and company’s developments, I arranged a meetup with Mr Sydney Yeung, CEO of GSS Energy for an exclusive discussion of the company’s business developments and prospects.

Below are the key takeaways from the meetup.

Some important differences are as follows:

a) Low probability of the contract being cancelled

Previously, the old well contract which GSS had, was suddenly terminated on 16 Jul 2015. This was because Pertamina terminated the contract with the local cooperative, KUD. As a result, KUD does not require the GSS’ services (i.e. GSS is akin to a subcontractor in this contract). Since then, GSS learnt from their previous experience and made a few significant changes in this latest contract.

Firstly, Pertamina awarded the KSO contract directly to GSS’ subsidiary PT Sarana GSS Trembul (“PT SGT”). Secondly, PT SGT is a joint venture between GSS Energy and PT Sarana Pembangunan Jawa Tengah (“PT SPJT”), a commercial vehicle wholly-owned by the Provincial Government of Central Java which holds stakes in various large-scale infrastructure projects in Indonesia. Thus, this joint venture is quasi state-owned to a certain extent. With the backing of Provincial Government of Central Java, it is less likely for the contract to be cancelled.

b) Funds will be paid directly to GSS

In a simplistic manner, KSO contract works on a cost recovery model. This means that for the sale proceeds which GSS gets from the sale of oil, the proceeds will be used to offset against the capital expenditure required in drilling oil. Any excess will be split in a pre-determined manner between Pertamina and GSS.

According to management, its cost of oil production is around the region of low teens. The cost of production is low due in part to the following factors:

a) Onshore drilling, initially target up to 800m;

b) Rig operators are charging lower rates due to depressed oil prices and lack of business;

a) ExxonMobil’s oil production is in close proximity to GSS

In terms of oil production, ExxonMobil produces about 180K barrels / day and it targets to increase to 240K barrels / day. As ExxonMobil’s site is in close proximity to GSS, it is likely that GSS site should be able to produce oil too.

According to a Qualified Person’s Report (QPR) conducted, Trembul area has a net substantial 24.32 million stock tank barrels of high estimate Contingent Resources up to the depth of 800 metres. Potential reserves beyond 800 metres depth has not been estimated yet. With this QPR, it corroborates management’s optimism that there is a high probability of oil production.

GSS mentioned that the Trembul area has a net substantial 24.32 million stock tank barrels of high estimate Contingent Resources up to the depth of 800 metres. What does this mean for the retail investor and what is the value of Trembul oil fields?

c) 24.32m stock tank barrels only covers a small percentage of the entire Trembul area which GSS is allowed to work on. Furthermore, 24.32m stock tank barrels is an estimate for depth up to 800m. Theoretically, GSS can and is likely to drill deeper. If GSS drills deeper and / or covers more area of the Trembul area, there is a likelihood that they may hit more oil which will further raise the amount of oil resources.

Based on 1HFY16 results, GSS is sitting on a net cash position of S$15m. Based on their existing estimates, it is unlikely that it has to do a cash call, unless they intend to expand their oil production aggressively. GSS expects to commence oil production by 1HFY17.

Precision Engineering (“PE”) business has been doing fairly well this year. Furthermore, GSS was awarded a significant order to produce game consoles for an established game console player which is expected to commence production late this year. Thus, it is likely that PE business should be fairly sustainable in the next couple of years. In addition, as GSS relocates into their new factory in Changzhou in 1HFY17F, it will do more active marketing for their PE business with their expanded production capacity.

It is noteworthy that GSS’ market capitalisation is only around S$40m as of 10 Oct 2016 vis-a-vis the extremely simplistic indicative value of the Trembul area of around S$100m (US$73m equivalent). In addition, it is noteworthy that GSS has approximately S$15m of net cash and its PE business registered S$7.6m of core earnings last year. 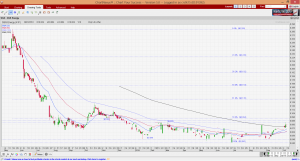 The recent KSO contract with Pertamina seems to be a game changer for GSS’ oil business division. Coupled with its thriving PE business and the bullish chart setup, this is an interesting company to take a closer look. However, readers should note the usual risks such as illiquidity; execution risk in the oil business division and the risks involved in doing business in Indonesia.

The above summarises the key takeaways from my meeting with Sydney, GSS Energy CEO. Readers should take a look at GSS Energy website HERE for more information.