Notwithstanding most experts’ dire predictions that Dow may plunge as much as 10% on Trump’s win, Dow closed at a record high AFTER Trump’s win!

On 3 & 4 Nov 2016, I have informed my clients that S&P500 typically rebounds when its RSI touches 27 – 32. As of 4 Nov, S&P500 RSI closed around 29 on 3 Nov. I have also mentioned that as my eventual technical target is around 2,065 vs 3 Nov close of 2,089, there seems to be limited potential downside. For those clients who wish to build up their blue-chip portfolios over time, they can consider accumulating on weakness.

Based on Chart 1 below, S&P500, after closing below its 100D exponential moving average (“EMA”) for six consecutive days, surged with volume and closed above its 100D EMA (currently 2,137) for five consecutive days. 21D EMA has just formed a golden cross with 50D EMA on 10 Nov 2016. Another positive feature is that the directional indicators (“DIs”) have turned positive with ADX closing at 28. S&P500 has closed above 2,157 for three consecutive days. Although time is required to observe whether the golden cross is sustainable and whether S&P500 can continue to close above 2,157, S&P500’s chart looks more positive than two weeks ago. My personal view is that the bearish tinge which has clouded the S&P500 chart has been negated.

Chart 1: A sustained close above 2,157 with volume negates the bearish tinge in the chart 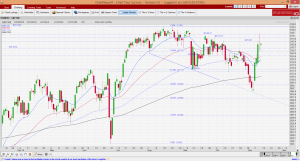 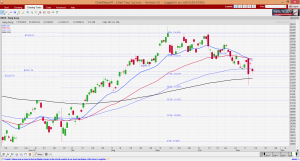 –> This was spot on in various aspects.

Based on Chart 3 below, amid the negatively placed DIs, ADX has risen from 15 on 28 Oct 2016 to 22 on 11 Nov 2016. It is noteworthy that ADX closed at the highest level since Aug 2016. There seems to be some indication of a trend. All the EMAs are sliding. Indicators such as OBV, RSI and MACD have not shown any bullish divergences.  My personal view is that the current chart outlook is not clear but it is laced with a small tinge of bearishness. The chart will be clearer if STI makes a sustained close above 2,860, or make a sustained close below 2,781. A sustained break below 2,781 / above 2,911 points to an eventual measured technical target of 2,650 / 3,040 respectively. All in, I believe STI’s volatility is likely to rise in the next few weeks and may trade between 2,760 – 2,911. 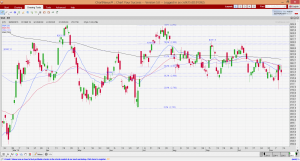 With reference to my write-up on 28 Oct 2016 (see HERE), I wrote that “I am cognizant that the U.S. Election may be a market moving event, I do not waste precious time in predicting the outcome and the subsequent market reaction as I am well aware of my limitations in such predictions. (I prefer to use my time to research and spot stocks with potential near term catalysts and position my portfolio accordingly)”

Most market pundits did not expect a Trump Win. Furthermore, most of them estimated that the U.S. market is likely to tumble with a Trump win. Some went as far as predicting an immediate 10% drop in Dow, should Trump win. The market surprised on two fronts. Firstly, Trump won the Presidential Election. Dow futures initially tumbled on this surprise win during Asian hours but closed at a record high on last Fri.

My percentage invested continues to be around the same level at around 89-90% invested.  I can easily raise my equity allocation to 150-200% with the help of CFD. I.e. I can still buy on weakness especially on certain blue chips if they become severely oversold.

The reit sector, as measured by the FTSE ST Real Estate Investment Trust fell 3.1% from an intraday high of 741.9 on 9 Nov 2016 to an intraday low of 719.0 on 11 Nov 2016. This was mainly attributed to rising interest rate expectations and a spike in bond yields. As a whole, the reits are currently trading approximately 450bps above 10 year Singapore government securities and less than 1.0x P/BV. Based on such metrics and my view that the Fed is likely to continue their measured / accommodative pace of rate hike, reits seem to be attractive. I have done a personal compilation of reits / business trusts using Bloomberg data as of 11 Nov 2016 and will be sending the entire list to my clients and readers on my website signup list. I have appended the top 3 reits / business trusts sorted by total potential return in Table 1 for your reference.

*Please note that the information is sourced from Bloomberg. I have not checked the accuracy of the above data. They do not form any specific “buy, sell, hold” recommendation.