Just to recap what I have mentioned on 11 Nov 2016 (see HERE), I wrote “S&P500, after closing below its 100D exponential moving average (“EMA”) for six consecutive days, surged with volume and closed above its 100D EMA (currently 2,137) for five consecutive days. 21D EMA has just formed a golden cross with 50D EMA on 10 Nov 2016. Another positive feature is that the directional indicators (“DIs”) have turned positive with ADX closing at 28. S&P500 has closed above 2,157 for three consecutive days. Although time is required to observe whether the golden cross is sustainable and whether S&P500 can continue to close above 2,157, S&P500’s chart looks more positive than two weeks ago. My personal view is that the bearish tinge which has clouded the S&P500 chart has been negated.”

Based on Chart 1 below, S&P500 is on a clear uptrend. All the EMAs are rising with 21D EMA forming golden cross with 50D EMA on 10 Nov 2016. Amid positive placed directional indicators (“DIs”), ADX continues to move higher from 28 on 11 Nov 2016 to 31 on 25 Nov 2016. It is noteworthy that indicators such as RSI, MACD and OBV have not hit new highs with price, thus there may be some bearish divergence. Furthermore, RSI closes at 71 on 25 Nov 2016, near a two-year high since Nov 2014. Thus, there is a possibility that near-term potential upside may be limited to around 2,225 – 2,250 before some consolidation or profit taking sets in. 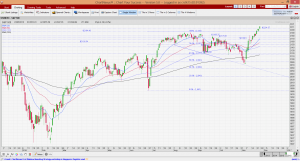 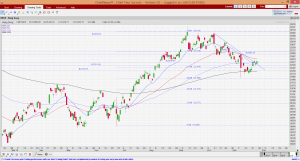 On 11 Nov 2016, I wrote that “Amid the negatively placed DIs, ADX has risen from 15 on 28 Oct 2016 to 22 on 11 Nov 2016. It is noteworthy that ADX closed at the highest level since Aug 2016. There seems to be some indication of a trend. All the EMAs are sliding. Indicators such as OBV, RSI and MACD have not shown any bullish divergences.  My personal view is that the current chart outlook is not clear but it is laced with a small tinge of bearishness. The chart will be clearer if STI makes a sustained close above 2,860, or make a sustained close below 2,781. A sustained break below 2,781 / above 2,911 points to an eventual measured technical target of 2,650 / 3,040 respectively. All in, I believe STI’s volatility is likely to rise in the next few weeks and may trade between 2,760 – 2,911.”

Based on Chart 3 below, ADX is still negatively placed, and has slightly risen from 22 on 11 Nov 2016 to 23 on 25 Nov 2016. 21D, 50D and 100D EMA seem to have stopped their declines and are inching upwards. STI has just closed above its 200D EMA, the first time in 1 ½ months. Indicators such as RSI, MACD and OBV are strengthening. As previously highlighted, if STI can make a sustained close above 2,860, the bearish tinge in the chart will be negated. A more positive signal will appear if it can make a sustained close above 2,911. A sustained break below 2,781 / above 2,911 points to an eventual measured technical target of 2,650 / 3,040 respectively 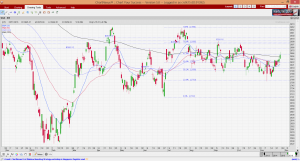 For the past two weeks, I have increased my percentage invested from 89-90% invested to a high of 138% on opportunistic trades on certain blue chips. I have since taken profit. I have also recently increased my position in certain small caps. As a result, my percentage invested is around 107% as of 25 Nov 2016. I can easily raise my equity allocation to 150-200% with the help of CFD. I.e. I can still buy on weakness. Alternatively, if some stocks overshot on the upside, I may engage in opportunistic short trades via CFDs.

As I have previously mentioned before, everybody is different thus, the percentage invested should differ per your risk profile, return expectation, market outlook, investment horizon, commitments etc. Readers should be aware of the following events in the next few weeks:

8 Dec: ECB meets and may announce whether they intend to extend the QE as the bond buying program expires in Mar 2017;