The animal spirits seem to have descended on our Singapore market! Our STI is one of the best performing indices with a blistering 7.6% year to date return. Our FSTS ST Small Cap Index has returned 4.6% for the same period. Have you benefitted from this rally?

Just to recap what I have mentioned on 27 Jan 2017 (see HERE), I wrote “it is very worrying (more worrying than 13 Jan) that the various indicators such as RSI, MACD, OBV and MFI continue to exhibit bearish divergences. ADX has slid from 41 in Dec 2016 to close at around 20 on 27 Jan 2017, which may indicate that the trend seems to be weakening. Given the various chart indications, although S&P500 continues to be on an uptrend amid rising exponential moving averages (“EMAs”), I reiterate that S&P500 may have limited potential upside with resistance 2,300 – 2,325. It is unlikely to make a sustained close above 2,325 in the near term.”

Based on Chart 1 below, various indicators such as RSI, MACD, OBV and MFI continue to exhibit bearish divergences. ADX has slid from 41 in Dec 2016 to close at around 18 on 10 Feb 2017, which is indicative of a trendless market. RSI closed at 70 on 10 Feb 2017. Given the various chart indications, although S&P500 continues to be on an uptrend amid rising exponential moving averages (“EMAs”), I reiterate that S&P500 may have limited potential upside with resistance 2,300 – 2,325. It is unlikely to make a sustained close above 2,325 in the near term. 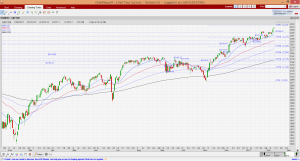 Chart 2: Hang Seng looks more promising than S&P500 but is getting overbought 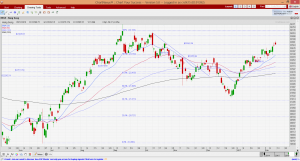 On 27 Jan 2017, I wrote “my personal view is that STI’s chart seems to have limited potential upside. Coupled with the points (such as STI hitting my eventual measured target; dragonfly doji; bearish divergences from indicators), STI’s risk – reward is not favourable for long positions. Furthermore, my view is that it is likely to be most prone to profit taking vis-à-vis S&P500 and Hang Seng.”

Based on Chart 3 below, I reiterate my cautious stance on STI’s chart due to

c) There seems to be rotation to the small cap, especially the penny counters. For example, Serrano surged 3,900% from $0.002 on 31 Jan 2017 to an intraday high of $0.080 on 8 Feb 2017. FSTS ST Small Cap Index has outperformed the STI by returning 2.0% for the past two weeks, vis-à-vis 1.2% for STI. Typically, when such penny stocks start to rally to such magnitude, it seems to be indicative of (at least) some froth in the market.

All in, my personal view is that STI’s risk – reward is generally not favourable for long positions. Readers who are extremely nimble may be able to get a few bids of profit here and there. However, they have to be fast to exit long speculative positions, should the tide turn. 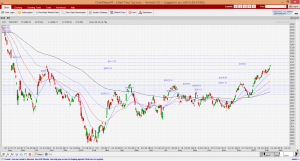 Since 27 Jan 2017, I have taken profit on some stocks, initiated long and short positions on certain stocks. Overall, my net percentage invested was approximately unchanged, just below 50%.

As previously indicated, I am cautious on the general market, especially those stocks which have reached overbought levels. However, as the recent market trend is “stock rotation”, I have pinpointed some interesting charts, namely Midas, Sapphire, Sunpower, Terratech on 9 Feb 2017 which catch my attention. Below is a summary of my observations based on 9 Feb 2017 information.

Terratech – seems to have broken out on 9 Feb 2017 with volume expansion.

As I feel that the market is pretty high with a certain level of froth, although I may do some short-term trading, I remain ready to exit my long positions quickly, if necessary. (My clients have, will & are informed on new stocks which I have entered and upon any significant portfolio change.)

Hereby, wishing all readers a blessed and prosperous Rooster Year ahead!