This week, Sunpower attracts me due partly to the industry which it is in; the recent US$180m investments made by DCP and CDH into Sunpower whose market cap is only around US$206m, and the considerable 40% share price decline since hitting an intra-day high of $0.645 on 28 Jun 2018 to trade $0.385 today. Let’s take a look.

Based on Sunpower’s description, it is an environmental protection solutions specialist in proprietary energy saving and clean power technologies. It has two main business segments, viz. Manufacturing & Services (“M&S”) and Green Investments (“GI”). M&S segment comprise of Environmental Equipment Manufacturing (“EEM”) and Engineering, Procurement and Construction Integrated Solutions (“EPC”). Notwithstanding the growth in M&S segment (Sunpower serves blue chip clients such as BASF, BP, Shell etc.), it plans to focus on its GI segment as it generates intrinsic value in the form of long-term, recurring and high-quality cash flows. Please refer to Chart 1 below and Sunpower’s company website HERE for more information. 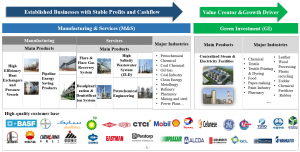 In an industry endorsed by China’s government policies

One of the most attractive aspects of Sunpower is the industry it is in. It is common knowledge that China places environmental protection as one of their utmost priorities. China’s 13th Five-Year Plan for National Eco-environmental Conservation and the enforcement of the Environmental Protection Tax are some examples that China is determined to reduce pollution in the long term. With reference to a July 2018 article by Reuters, China has established a new cross-ministerial leadership group (rather than just to leave solely to the Ministry of Ecology and Environment) to solve pollution in northern regions around Beijing. This also underscores the importance that China places on pollution. In view of these supportive policies, Sunpower seems to be in the right industry with sanguine prospects.

EEM segment comprise of design, R&D and manufacture of customised energy saving and environmental protection products with proprietary heat transfer technologies. Its products include heat exchangers and pressure vessels, and pipeline energy saving products. According to Sunpower’s annual report 2017, the heat-transfer rate of the Group’s heat pipes and heat pipe exchangers is 3,000 times faster than that of conventional products, and its heat exchangers are able to achieve energy savings of 30%-50%. This translates into significant cost reduction for customers. This may arguably be the reason why Sunpower has managed to secure a total of RMB150m from a single customer in U.S. and RMB 500m worth of contracts from GCL-Poly and other polysilicon companies.

For its EPC segment, one of the systems which Sunpower provides is the Flare and Flare Gas Recovery System. This is used to recover useful petrochemical by-products from flare or waste gas, reduce pollutant discharge into the atmosphere, lowering costs for customers. It is noteworthy that Sunpower is the only officially-appointed supplier of flare systems for Shell from Asia, and one of the three such suppliers for Shell in the world. It manages to secure a contract worth RMB107m with Zhejiang Petrochemical at the start of 2018. According to company, this is the largest flare gas recover system ever in China’s petrochemical industry which underscores Sunpower’s capability in managing EPC’s contracts.

Each business segment compliments one another

With Sunpower’s 20 years of track record in the EEM and EPC segments, it has progressed into its GI business with the ownership and operation of centralised steam, heat and electricity plants. These GI projects are built internally as Sunpower has the knowledge and capabilites to do so with its EEM and EPC business segments. Building in house allows Sunpower to have control over its costs and construction schedule, thereby increases its competitiveness against other players. Furthermore, its GI business naturally drives demand back to its EEM and EPC segments.

Sunpower has brought recycling to the next level via this circular economy concept where the waste materials from one company or industry become the feedstock for another industry. For example, in Sunpower’s Changrun facility (see Chart 2 below), sludge and treated wastewater from a neighbouring water treatment plant are used as fuel and a clean water substitute to run its boilers. Sunpower also sells its own wastes such as ammonium nitrate and ash to fertiliser and building material factories. Overall, this reduces costs, provides an additional revenue source to Sunpower (by selling its waste products to another industry), and is in line with China’s environmental policies. 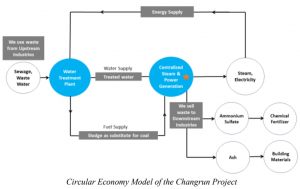 Sunpower has laid out clearly to the investment community of its GI’s existing and planned projects. Such projects, if materialised and successfully executed, should bode well for the growth of their GI segment. 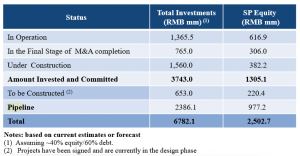 *The RMB765m investments in the final stage of M&A completion refers to Yongxing Thermal Power Plant has been completed and announced on 5 Sep 2018.

Sitting on record order books for its EEM & EPC segment

As of Jun 2018, Sunpower is sitting on a record order book of RMB2.0b even after delivering record 1HFY18 revenue. Although Sunpower has many repeat customers (in fact, 70% of their customers in EEM & EPC segments are repeat customers), Sunpower continues to expand into new areas and markets. The contract win amounting to a total RMB150m from a single customer in U.S. is a case in point.

Table 2: Record order book with 70% of customers being repeat customers 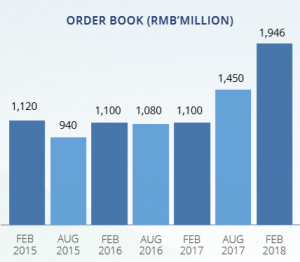 For Sunpower to build up its GI investments, it requires funding. Both DCP and CDH are private equity funds which have extensive experience in investing in China companies and have invested an aggregate US$180m into Sunpower. Some points worthy to highlight

2HFY18 should be stronger than 1HFY18

According to company, 2HFY18 should be stronger than 1HFY18 due mainly to the following reasons:

a) Completion of Yongxin acquisition on 5 Sep 2018 which is expected to contribute immediately to top and bottom line;

b) 1st half is usually a seasonal slower period due partially to Chinese New Year. According to a Lim&Tan report, they estimate that 1st half typically comprise 30-40% of its entire full year results;

c) Ramp up of GI projects through new pipeline connections and new customers. Firstly, its GI investments can gain traction due to China’s mandatory closure of small “dirty” boilers in existing industrial parks and relocation of new factories into parks served by GI’s centralised boilers. Secondly, Changrun has successfully connected to the grid last month and electricity revenue will be another source of income from Sep 2018 onwards. Thirdly, Xinyuan should do better in terms of heating revenue as it is envisaged that more heat will be supplied in 2HFY18 where weather becomes colder in China.

Sunpower has dropped 40% from an intra-day high of $0.645 on 28 Jun 2018 to trade $0.385 on 24 Oct 2018. The decline in the past three days has been accompanied with above average volume. Based on Chart 3 below, Sunpower has been on a long term uptrend since 2016 but has breached this uptrend line yesterday. Amid the sharp fall in the past three days, ADX has risen from a low level from 12.8 on 22 Oct 2018 to trade 19.2 with negatively placed directional indicators. Indicators are oversold. For example, MFI is around 5 (lowest level it can reach is 0) and RSI last trades 19.2. Since 2005, there were only five occassions where RSI is lower than now with the lowest RSI at 16.6. Although the stock price is near a two year low, OBV is still at a rather elevated level.

On balance, chart looks bearish for Sunpower especially after it breached the uptrend line with volume expansion. However, oversold pressures have built with the 27% decline in the past three days. Nevertheless, it is noteworthy that Sunpower’s illiquidity makes chart reading tricky.

Based on Table 3 below, analysts are projecting Sunpower to post strong 2HFY18F results of EBITDA and net profit of around RMB261m and RMB176m respectively. It is noteworthy that Sunpower posted 1HFY18 EBITDA and net profit of around RMB145m and RMB73m respectively. Thus, based on visual comparison, it seems to be challenging. Nevertheless, analysts are positive due to the aforementioned reasons (see above “2HFY18 should be stronger than 1HFY18”) Lim & Tan and UOB ascribe target prices $0.95 and $0.76 respectively.

If readers refer to Sunpower’s 1HFY18 net profit attributable to shareholders, you may get a shock to see that it only registered RMB1.4m net profit. This “low profit” is due to the effects of the convertible bonds which it issued to DCP and CDH. To reflect its true operating performance, company has put in another line called “underlying net profit” in their 1HFY18 results press release. 1HFY18 underlying net profit jumped 25% to RMB72.5m vis-a-vis 1HFY17.

Based on Table 1 above, Sunpower has invested and committed RMB1.3b equity into GI projects. If everything goes according to plan, it may invest and commit another RMB1.2b into new projects. As of now, Sunpower has six GI plants (including Yongxin). Thus, it may still be too early to assess whether Sunpower can effectively execute its strategy of acquiring and operating the GI plants effectively and according to project schedule.

It is noteworthy that Sunpower plans to finance the GI plants with 60% debt and 40% equity. Thus, its debt is likely to increase over time. Nevertheless, this may be “good debt” as a) according to company, the internal rate of return for such projects is around 15% per annum, thus it seems financially sound to finance partially via debt; b) the cashflows generated by GI are long term, high quality, recurring in nature and subject to less volatility which should be able to easily pay off interest expenses etc (barring unforeseen business failure of one or a number of major user factories)

Although Sunpower’s liquidity has improved this year vis-à-vis last year, its average 30D volume is still around 185K shares per day. This is not a liquid company where investors with meaningful positions can enter or exit quickly.

I have no direct access to management and am not extremely familiar with the company. This is my first write-up on the company and I am still trying to understand more about the company. Readers who wish to know more about Sunpower can refer to the company website HERE and analyst reports HERE for more information.

Recent selling is accompanied with volume

Recent selling has been fierce and accompanied with above average volume. It is possible that there may be some news known to the market but unknown to me on Sunpower which may explain why the share price dropped so much in the past three days.

Volatile due in part to its illiquidity

As Sunpower is pretty illiquid, it can be quite volatile at times. Average daily range can easily be $0.020 (without any particular news), translating to 5% of share price movement. Thus, it may not be suitable to most people.

Notwithstanding the sharp sell off in the share price, I like the industry which Sunpower is in. Furthermore, their GI investments and the entry of the CDH and DCP seem to bolster confidence. Importantly, readers should do their own due diligence (especially taking into account of the recent fierce sell off without any news) as this is just my introductory write-up in Sunpower. I am still learning about the company.

P.S: I am vested in Sunpower. Do note that as I am a full time remisier, I can change my trading plan fast to capitalize on the markets’ movements.