Most things have not changed since 21 Sep, except for…

In Sep, when S&P500 hit 2,940, the usual concerns were also there, namely trade tensions; U.S. 10Y treasury yields above 3%; Brexit; concerns on Europe; peak in earnings growth in U.S. market; slowing global growth etc. Since then, nothing much has changed except that

a) Part of the yield curve has inverted

On 3 Dec 2018, the yield curve for U.S. 3Y note and U.S. 5Y note inverted. According to the chief economist of North America at The Conference Board, he wrote in an article posted on MarketWatch 10 Dec 2018 that from the time that the above yield curve inverts, a recession typically starts from nine to 69 months, with an average of 27 months (i.e. more than 2 years).

b) U.S. and China have agreed on a trade truce for 90 days

U.S. and China have agreed on a “cease fire of sorts” on trade for 90 days. Notwithstanding the arrest of Huawei’s CFO in Canada and other negative headline news, it seems that China and U.S are still making some progress on the trade front post the dinner between President Trump and President Xi (i.e. it seems relatively better now than in Sep on the trade front)

U.S. 10Y treasury yields have dropped from >3% in Sep 2018 to 2.79% on 21 Dec 2018. This seems to be a net positive for stocks as this may reduce long term borrowing costs and increases the appeal of equities vis-à-vis bonds.

Has the bull market ended?

Nasdaq has slipped into a bear market with the 3% drop on last Fri. Most readers will be wondering whether the 9 or 10 year bull market has ended.

According to most strategists, the equity bull market typically ends when some of the conditions happen. For simplicity, I only list three conditions below (i.e. the list is not exhaustive).

Chart 1: Earnings and revenue growth in 2019 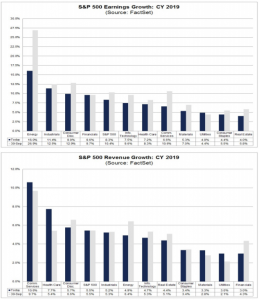 Global growth is slowing which is not new. However, based on data, it is unlikely that U.S. may slip into a recession in 1H2019. According to findings from Blue Chip Economic Indicators (see Chart 2 below), most economies are still likely to post some economic growth in 2019. Furthermore, according to the Conference Board’s Leading Economic Index, it still indicates good growth through mid-2019. Moreover, the surveys from the Institute for Supply Management are still reflecting continuous new orders of goods and services. Economic growth is important as according to Nuveen Asset Management, recessions have historically been associated with 20%+ drops in equity markets. 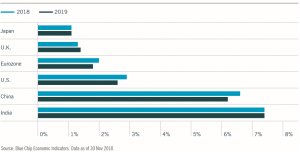 What does the chart say?

According to an article on MarketWatch (see Chart 4 below), from 26 Dec to the first two trading days of the new year (six-day period), Dow has risen 76% of the time since 1896 with an average performance of +1.5%. With the S&P500 clocking the worst Dec performance since 1931, I believe this sets a good environment for the Santa rally to occur (at least the risk to reward is better as compared to three months ago). 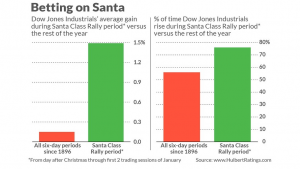 My personal strategy – may have a short term rebound

Although I am not an economist, I doubt we will slip into a recession in the near term. Furthermore, the current extremely bearish tone seems to be setting up a favourable risk to reward environment for a trade on a potential rebound in the next few weeks. I have been taking the chance to pare positions in Nov 2018 through 3 Dec 2018, thus I was <50% invested on 17 Dec. I have since started to use some of the cash to accumulate Singapore blue chip stocks on 20 & 21 Dec and long U.S. S&P500 indices on 22 Dec morning. I am currently around 131% invested (with leverage from CFDs), but may raise to 150-200% invested on further weakness. I have also been accumulating selective small caps on weakness. Please refer to the important caveats below.

As some of my private banking clients have enquired for a list of interesting SGX listed stocks to take a look, I have compiled a list of stocks based on Bloomberg’s data as of 21 Dec 2018. Table 1 shows only the top five stocks with the highest estimated total potential return.

Noteworthy points on Table 1 above

1. This compilation is based on Bloomberg’s data as of 21 Dec 2018, sorted with my set of criteria namely,

3. Even though I put “ave analyst target price”, some stocks may only be covered by one analyst hence may be subject to sharp changes. Also, analysts may suddenly drop coverage. In addition, analyst target prices and estimated dividend yield may be subject to change anytime, especially after results announcement or after significant news announcements;

4. Table 1 above is for reference and only shows the top 5 stocks with the highest estimated total potential return. Do note that these 5 stocks have smaller market capitalisation, and some are illiquid. Such stocks may arguably have a higher potential risk component vis-à-vis the likes of DBS and UOB. Therefore, readers should exercise their independent judgement and take into account of their percentage invested, returns expectation, risk profile, specific company developments and current market developments. It is best to research extensively before you make any investment decisions.

5. The entire list comprises of 90 stocks which I will send to my clients.

Meanwhile, merry Xmas and a happy 2019 ahead!

Naturally, my market outlook and trading plan are subject to change as charts develop. My plan will likely not be suitable to most people as everybody is different. My above basis is to trade on a potential small retracement in this huge sell-off, and not a reversal in the bearish trend. Do note that as I am a full time remisier, I can change my trading plan fast to capitalize on the markets’ movements. Furthermore, I wish to emphasise that I do not know whether markets will definitely rebound or continue to drop. However, I am acting according to my plans. In other words, my market outlook; portfolio management; actual actions are in-line with one other. Notwithstanding this, everybody is different hence readers / clients should exercise their independent judgement and carefully consider their percentage invested, returns expectation, risk profile, current market developments, personal market outlook etc. and make their own independent decisions.