This write-up was reproduced in entirety with permission from Ray’s Estate Clinic, written by Founder, Raymond Chng. Please refer to the end of the article for more information on Raymond.

In the previous 2017 En-bloc cycle, some resale properties in En-bloc hotspots saw price gains of up to 28%. (We wrote articles about these moves in a previous article, you can read about it HERE) 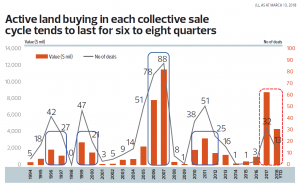 Given that En-bloc cycles tend to be 5 to 6 years apart, and the start of the last En-bloc cycle was in 2017, the next En-bloc cycle could be coming in the next few years. This could be the best time for property investors to look for opportunistic plays. In this article, we will explore where the next hotspots are. The usual disclaimer applies, this article is not meant to be investment and/or financial advice.

How to identify potential En-bloc hotspots?

In our view, to increase our probability of identifying a En-bloc hotspot, there are a few factors to look for in a development.

Where are the 3 Potential En-bloc hotspots?

The following choices are selected based on the above factors and our own personal opinions on the highest probability of an area becoming a hotspot. 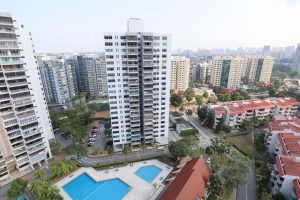 Will developers choose to purchase an En-bloc site in Lorong Chuan?

This residential cluster has not seen any new launch since The Scala was launched in 2010. It is just beside Lorong Chuan MRT and is in close proximity to Serangoon Gardens and NEX shopping mall. There has been genuine demand for the resale units in the area.

Let’s explore the surrounding new property prices to see if developers will explore a redevelopment in Lorong Chuan:

If we look at the nearby new property prices, there is clearly a potential that developers can launch a project at $1800psf or higher. Which should be positive for an En-bloc in the area.

Now let us explore the properties in surrounding Chuan Park to see if there are transactions that can support new launch prices here. 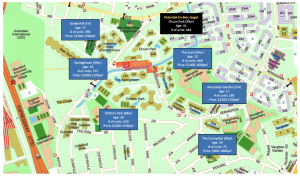 The highest price psf in Lorong Chuan is The Scala at an average price of $1500psf. If a new launch is priced at $1800psf, that would be a 20% premium which would likely be acceptable for most buyers.

The price gap between properties over 20 years vs the potential new launch price would be much higher at around 60-70% or $700psf difference. This price gap is also still acceptable, as in 2017, the price gaps hit up to $1000psf for new vs older condos.

The new to resale price gaps in this cluster provides a unique opportunity for property investors and even home buyers in today’s market. In general, majority of resale properties will see positive price movements after a potential En-bloc in the vicinity. However, it is not just about buying any unit here, unit & development choices will still be important as you would be living or renting out the unit. 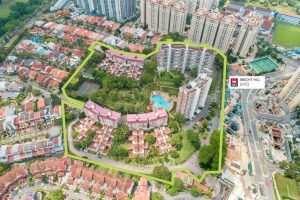 Will developers choose to purchase an En-bloc site in Bright Hill?

The soon to be completed Bright Hill MRT station will bring more accessibility and convenience to this property cluster by end of 2021. This may also increase property developer’s appetite for land in the vicinity.

Let’s explore the surrounding new property prices to see if developers will explore a redevelopment in Bright Hill:

If we look at the nearby new property prices, there is clearly a potential that developers can launch a project at $2000psf or higher. Which should be positive for an En-bloc in the area.

Now let us explore the properties in surrounding Bishan Park Condo & Faber Garden to see if there are transactions that can support the potential new launch prices here. 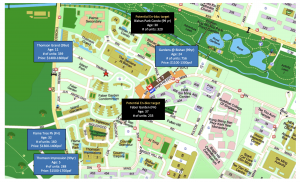 The highest transaction price is around $1700psf at Thomson Impressions which is the newest development in the area. Based on the potential price for a successful En-bloc in the area, the developer may have to sell units at $2000 – 2400psf.

Assuming Bishan Park Condo, a 99-year development, is successfully sold En-bloc, and if the developer sells units for around $2000psf, units there should see positive demand from buyers. Taking the price of Thomson Impression as a comparison, Bishan park condo at $2000psf would be a 17% price premium, which would be acceptable. In fact, the developer may potentially be able to price units at a higher psf.

Assuming Faber Garden, a Freehold development, is successfully sold En-bloc, and if the developer sells units for around $2300psf, it is possible given that usually freehold developments have a 15 to 20% premium vs leasehold properties of similar age. However, this pricing may be on the high side, and units may take some time to be absorbed by the market. In this case, buyers may look at surrounding resale options.

With the nearby Ang Mo Kio GLS site being sold for $1100ppr or a potential launch price of $1900psf, the Bright Hill property cluster is potentially promising. 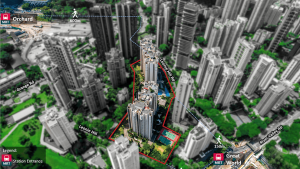 Will developers choose to purchase an En-bloc site in Leonie Hill?

The Leonie Hill property cluster is not short of new launches. In April 2021, Irwell Hill Residences by CDL was launched at an average price of $2636psf based on Edgeprop Data.

There are other new launches in the area which are priced similarly if not higher, let us explore.

If we look at the nearby new property prices, there is clearly a potential that developers can launch a project at $3000psf or higher. Which should be positive for an En-bloc in the area.

As the buyer profile for the Leonie Hill property cluster are less price sensitive but more product focused. The pricing strategy in which the developer can price their units are dependent on the design, user experience and architecture of the new property.

En-bloc of older properties in this cluster will also likely be positive for the nearby newer properties and may elevate prices around the area. As older developments in the area are rebuilt, the area will experience a fresh look. We think developers will have incentive to purchase an En-bloc in the area.

Now let us explore the properties in surrounding Horizon Towers and Leonie Garden to see if there are transactions that can support the potential new launch prices here. 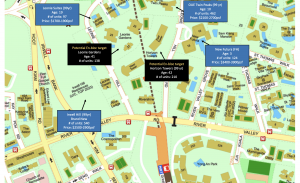 Assuming a new launch price of $3500psf +/- by the developer for both potential En-bloc developments, it would be at a premium of 10-15% to Irwell Hill Residences and around the same price as the newer freehold development like New Futura, which is still acceptable.

If we compare the launch price with Leonie Suites, then there would be a huge price gap. However, as previously discussed, launch prices in the area may vary depending on architectural design and overall user experience of the development. Therefore, we believe that developers will consider purchasing an En-bloc development and the Leonie Hill property cluster is potentially promising.

How can you potentially profit from these hotspots?

There are two ways to benefit from an En-bloc.

This method has huge risks attached to it. If the development doesn’t go En-bloc, you would be holding on to a very old property that likely has low rental yield. Worst still, if it is a 99 year property, lease decay may accelerate as the property grows older.

This method has less risks, you generally hope for the En-bloc target to be sold to a developer which will launch their new development at a significantly higher price. Just like in the Amber Road and Beauty world property cluster examples mentioned in our older articles. If the right property is chosen, there is a chance that your property will see its price gap narrow upwards, closer to the new development’s price.

As always, we will be happy to discuss about the contents in this article. Do reach out to us if you have any questions or comments. To end off, this article is not financial and/or investment advice. If required, please do your own research and get independent advise where necessary.

Ray’s Estate Clinic (REC), founded by Raymond Chng, is a platform for Investors’ and homeowners to have a Property Portfolio Health Check by utilizing data analytics, ensuring that their portfolio remains healthy providing optimized returns.

“Health is Wealth” is what Raymond believes in, and it is not related only to your own body’s health, but it also refers to one’s financial health. Having a Property Portfolio that is not performing does not help improve an investor’s wealth. Hence, converting non-performing assets into optimized performing assets is essential to portfolio’s health improvement.

Raymond can be reached at raysestateclinic@gmail.com. Do visit his blog HERE for more information.

Please refer to Raymond’s blog for the disclaimer HERE