Two weeks ago, I mentioned that I have increased my stock holding from 36% to 80% by accumulating on one stock on weakness. I have since taken profit on this single largest stock holding and have pared my stake in another stock. Besides the stock sales, I have increased my stake in another stock on weakness. All in, my percentage invested was reduced from 80% to approximately 31%.

I am unlikely to exceed 50% invested in the next two weeks, unless I spot some extremely attractive opportunities as I remain cautious on the general market.

Read on to find out why. 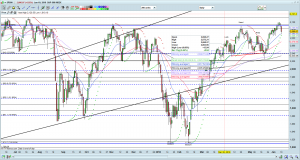 On 27 May 2016, I mentioned that “Hang Seng still has a bearish tinge in the chart. A sustained break above its declining 200D exponential moving average “EMA” (currently at 21,369) will negate the bearish tinge”

Based on Chart 2 below, although Hang Seng has not made a sustained breach above its 200D EMA, the bearish tinge has been negated to a certain extent by the golden crosses formed from its 21D EMA with 50D EMA and 100D EMA. Furthermore, ADX has climbed from 20.5 on 27 May to 25.3 on 10 Jun, indicative of a trend. However, in my opinion, the chart outlook is best described as neutral to mildly positive. It would be a strong positive if Hang Seng can make a sustained breach above its 200D EMA (currently around 21,335). Conversely, it is negative if Hang Seng makes a sustained break below the support area 20,435 – 20,693. It is noteworthy that there is an event risk (among the many risks highlighted below) on 14 Jun 2016 as MSCI will reveal whether they will add mainland-traded Chinese stocks to its global indexes. 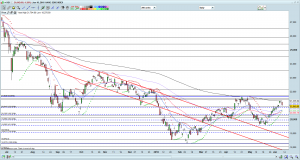 On 27 May 2016, I wrote that “STI seems to have staged a bullish break out from this range on 27 May 2016, by closing at 2,803. However, we need a few days to monitor whether the bullish break is on a sustained basis. My personal view is that STI still has a bearish tinge in the chart. It faces strong resistance around 2,791 – 2,825 over the next few weeks. In the unlikely event that it makes a sustained close above 2,825, a more formidable resistance is at its declining 200D EMA, currently at 2,882.

On 9 Jun 2016, I followed up with an email to my clients in the morning (STI was trading at 2,877 then) to alert them that based on chart, STI is unlikely to make a sustained breach above its 200D EMA which was at 2,877 at that time, thus there was limited potential upside. 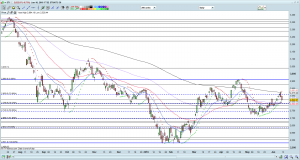 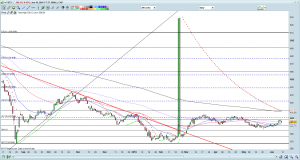 Two weeks ago, I mentioned that I have increased my stock holding from 36% to 80% by accumulating on one stock on weakness. I have since taken profit on this single largest stock holding and have pared my stake in another stock. Besides the stock sales, I have increased my stake in another stock on weakness. All in, my percentage invested was reduced from 80% to approximately 31%. (My clients have, will & are informed on new stocks which I have entered and any significant portfolio change.)

My outlook remains the same. Notwithstanding some specific stocks, I remain cautious on the general market. Some of the factors which cause me to be wary are:

a) MSCI decision on whether to include China into its global indices;

b) Upcoming FOMC meeting on 15 Jun 2016 (we shall know the outcome on 16 Jun, 2 am à Current expectations price in 0% for a rate hike in June but it is good to monitor what the Fed says);

d) UK referendum on 23 Jun 2016. Personally I think the UK referendum is more important than the June FOMC. According to risk-modeling firm Axioma Inc, European stocks may drop by almost a quarter in value should Brexit occur;

Some other factors such as limited catalysts for funds to hold significant equity positions especially when most companies have already reported their results and / OR have gone ex-dividend etc. have been discussed in previous write-up (see here), thus I will not repeat the points here.

In view of the above factors, I am unlikely to exceed 50% invested in the next wo weeks, unless I spot some extremely attractive opportunities.

Readers who wish to be notified of my write-ups and / or informative emails, they can consider to sign up at http://ernest15percent.com so as to be included in my mailing list. However, this reader’s mailing list has a one or two-day lag time as I will (naturally) send information (more information, more emails with more details) to my clients first. For readers who wish to enquire on being my client, they can consider to leave their contacts here http://ernest15percent.com/index.php/about-me/