While doing my usual stock screening, Chiwayland pops out as one of the undervalued companies, based on price to book valuation metric. Coupled with its recent multitude of positive announcements, I decide to take a look at this company.

According to Chiwayland’s press release, its properties span across the heart of the Yangtze River Delta Region, including Shanghai, Suzhou and Nanjing. To date, Chiwayland has completed 11 property developments with an aggregate total GFA exceeding 2.0 million square metres, and is ranked as one of the Top 100 Real Estate Development Enterprise.

In 2014, the Group embarked on its internationalisation strategy and expanded to Australia. The Group currently has two projects in Brisbane and five in Sydney with a focus on residential and commercial properties.

In 2016, Chiwayland marked its maiden foray into the U.S. market with a mixed development project in Los Angeles, California – Urban Commons, LLC, comprising retail, hotel and residential units. Going forward, the Group has earmarked revenue contribution from overseas projects to be at least 50% within the next five years.

Multiple projects with potentially better margins in the pipeline

According to Chiwayland’s 1HFY16 results press release, it plans nine new property launches in 2HFY16F – four in Suzhou, one in Nanjing, two in Xuzhou, and two in Sydney – with a total GFA of approximately 400,000m. According to management, they were saddled with lower margin projects in the past. They expect most of their future projects due for completion, or to be launched, will offer better margins and will have a positive impact to their earnings. Such impact may even be seen as early as 4Q2016 as it will deliver two major projects, viz. The Suzhou Industrial Park Royal Mansion (Phase 1) and Suzhou Royal Palace (Phase 3) in 4Q2016. Chiwayland has sold more than 90% in both projects and target to handover them by year end.

Expects to turnaround this year

In view of the handover of Suzhou Industrial Park Royal Mansion (Phase 1) and Suzhou Royal Palace (Phase 3) in 4Q2016 by year-end, barring any unforeseen circumstances, it is confident to be profitable for FY2016. This is noteworthy, especially when 1HFY16 generated losses of around RMB54m.

According to Bloomberg, since 1 Jun 2012 through 2 Sep 2016, Chiwayland has traded between 0.21x – 2.20x. Average P/BV during this period is around 0.84x. Based on its latest 2QFY16 results, Chiwayland is trading at 0.4x P/BV with a NAV / share of around $0.293. If Chiwayland can execute well on its internationalisation strategy, there may be scope for re-rating.

Chiwayland has lost about 19% since hitting an intraday high of $0.148 on 15 Jul 2016. It closed at $0.120 today. Based on Chart 1 below, Chiwayland’s 20D exponential moving average (“EMA”) has started to reverse the decline. Furthermore, its 50D, 100D and 200D EMA are still moving higher. As Chiwayland is pretty illiquid, chart observation may be less accurate and more difficult. Nevertheless, near term supports and resistances are as below. A sustained break below $0.111 / above $0.127 is bearish / bullish respectively for the chart. 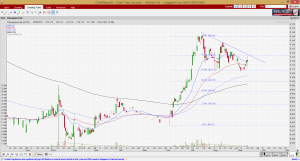 There are noteworthy risks in any investment. For Chiwayland, some risks to be aware of are the following:

Property companies usually experience lumpy results. Chiwayland’s strongest quarter is likely 4Q with the handover of the aforementioned projects. Any delay in the handover may affect its FY16 results.

Chiwayland plans to launch nine projects in 2HFY16. It is noteworthy that project launches do not necessarily translate to sales, as it depends on the take up rate on such projects.

Chiwayland is an illiquid stock. Its average 30D and 100D transacted volume amounted to 605K and 679K shares respectively. It is not easy for investors to either buy or sell Chiwayland in meaningful sizes. For example, if there are investors with significant positions who wish to exit Chiwayland, they may have to sell down several levels.

1HFY16 reported RMB54m loss, as compared to a loss of RMB21m in 1HFY15. It remains to be seen whether Chiwayland can turn around with a profit in 4QFY16F.

Chiwayland was listed via a reverse takeover (“RTO”) of R H Energy in 2014. According to some historical documents, R H Energy had issued 550 million new shares at S$0.69 each to Chiwayland as part of the RTO deal, thus resulting in Chiwayland holding a controlling stake in R H Energy.

In addition, I have not met Chiwayland’s company management before thus, what I have written is a compilation from the press releases announced on SGX.

The above risks are just some of the risks that readers have to be aware. It is not an exhaustive list.

Chiwayland’s planned nine property launches in 2HFY16 seems interesting, coupled with its low valuations of 0.4x P/BV. Furthermore, it will be interesting to view the various analysts’ comments on Chiwayland after their trip this week. Notwithstanding this, readers should be aware of the various potential risks in Chiwayland, such as lumpy results, execution risk etc. All in, this is likely to be a company on my watch list for further review in the future.

This is merely an introduction to the company. Readers should check out Chiwayland’s company website (click HERE) for more information.