Sino Grandness has slumped 45% from an intraday high of $0.785 on 7 Jun 2016 to $0.435 on 26 Sep 2016. Sino Grandness has broken its support at $0.450 on 22 Sep 2016 with a larger than average volume. It is on the verge of testing an important support around $0.415 – 0.425. If this breaks with volume and on a sustained basis, it will be pretty bearish. Based on Chart 1 below, it remains entrenched within a strong downtrend with death crosses forming on its 21D and 200D EMA and 50D and 100D EMA. RSI is trading at around 32 and based on my personal opinion, it is not low enough to trigger a significant technical rebound yet. Since Dec 2014, Sino Grandness typically rebounds when RSI is around 20. 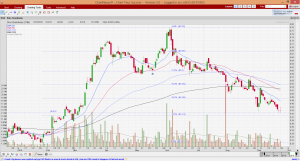