On 3 Nov 2016, GSS, through its subsidiary company PT Sarana GSS Trembul (“PT SGT”), has formally signed the Operation Cooperation Agreement with PT Pertamina EP for oil production. The agreement is for a period of 15 years, in the Trembul Operation Area spanning 47.63 sq. metres with no depth limitation. This was widely covered by the Indonesia media but there was only a small paragraph covered in our local newspaper.

GSS announced its 3QFY16 results on 11 Nov 2016. 3QFY16 revenue and core net profit (excluding one-offs) jumped approximately 15% and 600% to S$20.2m and S$1.5m respectively. It is noteworthy that 3QFY16 also showed a significant sequential improvement vs 2QFY16. Despite 4Q typically being a weaker quarter than 3Q, management is optimistic that 4QFY16 should be at least comparable to that of 3Q.

GSS announced on 15 Nov 2016 that Mr Tan Kay Guan, CEO of Giken Sakata (S) Limited, a wholly-owned subsidiary of GSS, has stepped down to pursue his own interest. It is noteworthy GSS’ CEO is still Sydney Yeung who is hands-on in both business segments, namely precision engineering and oil and gas. Thus, management believes there is zero impact on GSS’ operations. Furthermore, GSS is looking for suitable candidates to fill this role.

What is the big deal about the contract with Pertamina?

a) Potential intrinsic value of the field

Based on a Qualified Person’s Report (QPR), the Trembul area has a net substantial 24.32 million stock tank barrels of contingent resources up to the depth of 800 metres. Management shared the following simple calculation based on extremely simplistic assumptions.

ii) To be prudent, I multiply by 60% as a discount factor;

iii) 24.32m stock tank barrels is an estimate for depth up to 800m. Theoretically, GSS can and is likely to drill deeper. If GSS drills deeper, there is a likelihood that they may hit more oil which will further raise the amount of oil resources.

*GSS’ market capitalisation is around S$39m, as compared to the potential intrinsic value of almost S$100m for Trembul.

b) Cost recovery and profit sharing

Barring unforeseen circumstances, Management is optimistic that they are likely to produce oil in 2HFY17. Whatever oil or / and gas that is produced in Trembul has a guaranteed offtake by Pertamina. Based on GSS’ press release, this agreement entitles PT SGT to 23.5% of the petroleum and 31.4% of the natural gas produced in the Area, after accounting for operating costs.

At $0.078, GSS is trading at 1.1x Price to Book. Using figures cited from Bloomberg, GSS typically trades at an average 10-year Price to Book of around 1.5x.

Furthermore, excluding once offs, GSS is trading at an annualised FY16F PE of around 6.5x and 4.2x ex cash. Going forward, without considering any potential contribution from the oil and gas segment, valuations are likely to be lower if their engineering business continues to grow.

GSS, unlike most oil and gas businesses, is net cash

As most readers are aware, there are many oil and gas businesses in Singapore which are struggling with their interest payments, or upcoming bond redemptions. Thus, it is reasonable to assume that a considerable amount of management time is spent on “fire-fighting”, rather than business expansion. For GSS, the management has consciously kept itself debt free for the past three years.  With a healthy balance sheet, they can focus on business development. 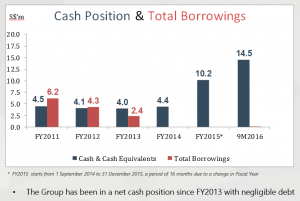 Possibility of a spin-off in the medium term

In late 2014 to early 2015, there was an internal restructuring of Giken Sakata (S) Pte Ltd by way of a scheme of arrangement such that GSS became the listed company. Giken Sakata (S) Pte Ltd became a wholly owned subsidiary of GSS. The rationale given at that time was that this restructuring allowed the potential partial, or full divestment of Giken Sakata (S) Pte Ltd. Fast forward to 2016, management does not refute the possibility of spinning off its engineering business once its oil and gas business segment gains traction. If this materialises, it should unlock shareholder value and allow proper valuation given to either business segment. Based on the above valuation, engineering business is trading at near book value, whereas the market is giving zero valuation to its oil and gas business segment.

Based on Chart 2 below, it is apparent that GSS is a volatile stock. GSS has dipped below its 200D exponential moving average (“EMA”) for the past five trading days. 21D EMA is declining. 50D EMA which has formed a golden cross with 200D EMA, is converging with 200D EMA again and may be in danger of going below 200D EMA. ADX has dipped below 20, indicative of a lack of trend. The chart has a bearish tinge which can be negated if it can make a sustained close above $0.081. However, a slightly more positive chart outlook will be if GSS can make a sustained close above $0.095.

Chart 2: Bearish tinge to be negated if it can make a sustained close above $0.081 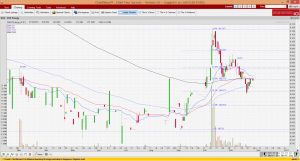 As usual, there are always risks involved, especially in small cap stocks with business operations in Indonesia.

It is noteworthy that this is the first time that GSS is operating this KSO contract. Notwithstanding that GSS has employed highly capable personnel in their oil and gas department, there may still be execution risks.

For those who have followed companies operating in Indonesia, you may be aware that there are things beyond the companies’ control, especially on project timeline. GSS has just submitted their budget to Pertamina for their work in the Trembul Area. Upon approval, GSS will commence a tender process to get the best bid for rig operators. Any delay in either the budget approval or / and the tender process for the rig operators may delay the oil production in Trembul.

Ave 30D and 100D volume amounted to around 2.1m and 1.1m shares respectively. In fact, in the past two weeks, there were only two days where the transaction volume exceeded 1m shares. Thus, this is an illiquid stock. Readers who want to transact should consider its illiquidity. Management is cognizant of the illiquidity and is doing their best to educate and update the investment community of the company’s developments. (See Figure 1 below) 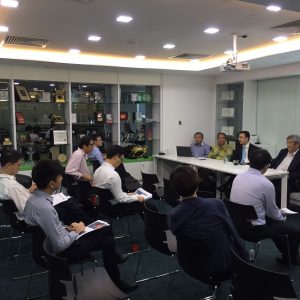 The recent contract with Pertamina and its strong engineering business with positive outlook, seem to bode well for GSS. Notwithstanding the volatile share price, this seems to be an interesting company to take a closer look. However, readers should note the usual risks such as illiquidity; execution risk in the oil business division and the risks involved in doing business in Indonesia.

Readers should take a look at GSS website HERE and my previous write-up (see HERE) for more information.