Midas has recently announced contracts after contracts. Based on Table 1 below, it is especially evident that Midas is gaining traction (particularly from 23 Jun 2016 onwards) in winning orders from clients, especially from its 32.5% stake in CRRC Nanjing Puzhen Rail Transport Co., Ltd. (“NPRT”). However, investors do not seem to share this optimism as Midas has fallen approximately 12% from $0.260 on 23 Jun 2016 to $0.230 on 3 Feb 2017. 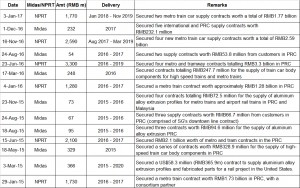 Is the market overly pessimistic on Midas? I am fortunate to meet Mr. Patrick Chew, Executive Director and Chief Executive Officer of Midas and Mr. Liaw Kok Feng, Chief Finance Officer (collectively “Management”) on an exclusive basis, to understand more about Midas’ and its business prospects.

Below are some key points based on my findings. I have also drawn reference to analyst and industry reports and corroborated my findings with management.

Spending on infrastructure, especially railway investments, continues unabated despite concerns on China’s economy and its debt. According to a press conference on 29 Dec 2016, China’s vice minister of transport, Yang Yudong said that China has budgeted RMB3.5t in railway construction from 2016 – 2020. According to a Caixin article on 3 Jan 2017, China Railway Corp, China’s railway operator, plans to invest RMB800b in building railway infrastructure and purchasing trains and equipment in 2017. This underscores the bright industry prospects which Midas is in.

Earnings are likely to grow in FY16F and FY17F due to several fronts, namely

a) Contributions from Huicheng Group

Based on DBS’ research note dated 18 Nov 2016, Huicheng contributed about 2 months of earnings to Midas in 3QFY16. It will contribute its full 3 months of earnings in 4QFY16F and 12 months in FY17F. Although Midas’ has not indicated the amount of earnings contribution from Huicheng in 3QFY16, it is likely to be significant. We may be able to get more details in 4QFY16F, especially if Huicheng manages to attain its “earn out target” by registering RMB80m in net profits for FY16F. (See SGX announcement HERE)

b) Potential synergistic benefits between Huicheng and Midas

The acquisition of Huicheng brings several synergistic benefits such as the hot rolled aluminium plates produced by Huicheng’s Luoyang plant can be used by Midas’ Jilin plant, and the aluminium alloy billets / ingots produced by Midas’ Luoyang plant can be used by Huicheng Luoyang. This allows Midas to better control its quality and cost of products. (See Figure 1 below)

Furthermore, besides expanding its range of products and services to include aluminium alloy stretched plates and hot rolled aluminium alloy plates and coils, Midas also expands its customer base and allow its entry into new industries and sectors such as aviation, aerospace, rail transportation, marine, automotive and petrochemical industries.

As the acquisition of Huicheng Group was completed on 27 Jul 2016, the above potential synergistic benefits may be more apparent in FY17F and beyond. 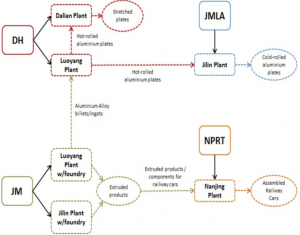 Midas’ aluminium alloy extrusion segment posted weaker results on slower project deliveries and on less high speed railway contracts. However, management believes that this segment is likely to improve in FY17F as they foresee that there are likely to be more high speed rail contracts in FY17F.

Midas’ aluminium plates and sheets segment is likely to commence commercial production in 1HFY17F. According to management, there is some delay as management wants to be sure all the processes in this segment are running smoothly before they start commence production. Management mentioned that they have already lined up customers for this segment, thus it is likely to be a matter of time before this segment makes a positive contribution to Midas.

Based on Chart 1 below, Midas seems to be in a base formation with a potential inverted head and shoulder chart pattern since Sep 2016. 20D, 50D and 100D exponential moving averages (“EMA”) have turned higher with 20D forming golden crosses with 50D and 100D EMAs. Midas seems to be consolidating its recent gains around the neckline / support area of $0.225 – 0.230. Indicators such as OBV has been increasing steadily, signifying accumulation. Indicators such as RSI and MACD have exhibited bullish divergences during the formation of the potential inverted head and shoulders pattern. ADX closed at 21, amid positively placed directional indicators. A sustained break above $0.240 with volume expansion confirms the bullish inverted head and shoulder formation and points to an eventual measured technical target of around $0.275.

Chart 1: Building a base formation 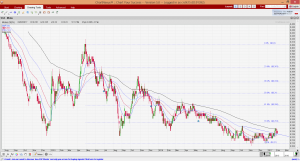 Below are just some of the risks on Midas. It is not an exhaustive list.

During its heydays, Midas was covered by numerous local and foreign houses such as former Merrill Lynch, Nomura, Credit Suisse etc. After years of share price underperformance, only DBS and OCBC are actively covering the stock with target prices $0.380 and 0.250 respectively. It may take some time for other analysts to cover Midas as some of them are likely to wait for its commercial production in aluminium sheets and plates segment and the successful integration of Huicheng group.

It is apparent that Midas is dependent on the rail industry in China, especially the high-speed rail segment for its core aluminium extrusion segment. However, this segment registered lesser orders last year. Nevertheless, management is optimistic that this segment should see an improvement in orders in FY17F vis-à-vis FY16.

Midas has just acquired Huicheng group on 27 Jul 2016 and it is commencing commercial production of its aluminium sheets and plates segment in 1HFY17F. Management is cognizant of execution risks and intends to focus on their three business segments, thus they are unlikely to do any major merger and acquisitions in the near term.

Based on DBS research note, Midas’ gearing ratio is 0.9x as of FY15. DBS believes that Midas gearing should improve to 0.7x by FY17F. Management is aware of this and they plan to pare down their debt gradually.