Riverstone recently caught my attention. It has tumbled approximately 32% from an intraday high of $4.90 on 7 Aug 2020 to close $3.33 on 11 Sep 2020. One client even thought that Riverstone has already undergone a bonus issue!

The recent weakness is likely attributed to its co-founder selling 15.5m shares at $3.95 (Bloomberg cites a 90-day lockup on seller); the possibility of a vaccine resulting in demand for gloves and consequently their average selling price (“ASP”) falling off the cliff and some Malaysia investors selling shares to raise cash, as their moratorium on loan repayment ends (click HERE for the article)

Granted that there is some merit to the above. However, is the 32% fall justified given that it is cheaper than its industry average based on FY21F PE? For this write-up, besides sourcing information from the usual sources, such as analyst reports; news articles etc, I have the fortune of catching up with Mr Wong Teek Son, Executive Chairman, Co-founder, and CEO of Riverstone for a 1-1 discussion last Thurs. My understanding of my discussion with Mr Wong is in italics.

Based on Figure 1 below, four analysts cover Riverstone with target prices ranging $4.73 – $6.00. Average analyst target is at $5.45, implying a hefty 64% potential capital upside (if the analysts are correct). Readers can refer to the website HERE for Riverstone’s analyst reports.

2. Demand is still in favour of glove makers

According to US-based Allied Market Research, they estimate that the global disposable gloves market may soar almost 3x from US$6.8b in 2019 to US$18.8 b by 2027.

Furthermore, based on an article on CNA dated 4 Sep 2020, Top Glove mentioned that demand continues to be strong with order backlog stretching to nearly 600 days, compared with a normal delivery time of 30 to 40 days.

3. ASPs continue to rise across the board

Based on a UOB Kayhian research report on Top Glove dated 4 Sep 2020, the analyst believes that Top Glove’s ASPs may increase 30% month on month (“mom”) from Sep to Oct (as opposed to 10% mom), followed by an additional 5-10% mom till year- end.

Based on Table 1 below, Riverstone trades at an attractive 14.1x FY21F PE as compared to its peers which are trading at an average 15.6x FY21F PE.

5. Bonus and dividend in the near term

Secondly, on 18 Aug 20, Riverstone announced that it is proposing a 1:1 bonus share with the aim of increasing the accessibility of investing in the Company to more investors, thereby encouraging trading liquidity and greater participation by investors and broadening the shareholder base of the Company. This bonus issue is pending the approval of Shareholders by way of an ordinary resolution at an extraordinary general meeting (“EGM”) to be convened and the approval from SGX. A circular for the EGM will be sent out to eligible shareholders in due course.

Based on my understanding, one single line has already been commissioned in Jul 20 with one double line being commissioned every month from Aug to Dec 2020. This will raise Riverstone’s annual capacity to 10.4b pieces by end 2020. Construction for Phase 7 of the Group’s expansion plans has started, and will add capacity of up to 1.4b pieces of gloves per annum by FY21F. Based on my understanding, the first line for Phase 7 is likely to start commissioning in Apr 21.

7. 2H should be much stronger than 1H

Furthermore, based on management’s observation, demand is stronger, and customers are less price sensitive now vs three months ago.

A case in point: As at 1HFY20, Top Glove has cash and investment securities amounting to MYR348m and MYR1.45b respectively. It is not a net cash company with MYR1.52b of short- and long-term loans and borrowings. However, it can spend almost MYR210m on share buybacks over the past three days. Based on my guess, it is reasonable to assume that Top Glove’s 3QFY20F cash balance may have increased much more so that they have the flexibility to do so. Hence, based on this premise, I believe it is reasonable to assume that Riverstone’s 2HFY20F net cash position should have increased much more too.

b) With such strong cash flow generation and healthy balance sheet, it is likely that Riverstone may be able to dish out more dividends in FY20F, perhaps even higher than their average dividend payout ratio of approximately 40%. 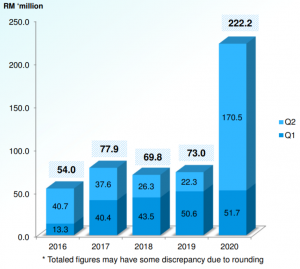 9. Wind fall tax unlikely in the near term

Based on a CGS-CIMB Research report on the glove sector dated 18 Aug 20, they wrote that after their checks with Malaysian Rubber Glove Manufacturers Association (MARGMA), there has been no discussion with the government on the topic of windfall tax. Hence it may not be likely that a windfall tax may be imposed on the glovemakers in the near term.

Almost all investments carry risks. I have listed some noteworthy risks but do note that it is not an exhaustive list of risks.

As the glove industry continues to enjoy supernormal profits, it is reasonable to assume that competition is likely to intensify either via incumbents increasing their capacities at a faster pace, or new entrants coming into the industry. Competition may erode Riverstone’s margins; reduces its ability to hike ASP and reduces its market share.

2. Demand for cleanroom gloves may decrease if economy continues to weaken

On 3 Sep 20, one of Riverstone’s co-founders Mr Lee Wai Keong sold 15.5m Riverstone shares @$3.95 / share. According to Bloomberg, there is a 90-day lockup period on the seller. Personally, although this may cast a near term pall over Riverstone’s share price, it is not necessarily a bad thing over the medium term. This is because

a) There can be many reasons why Mr Lee wants to sell his shares. For example, he may want to diversify his investments, or he may need cash for other purposes. It is noteworthy that Mr Lee still has around 8.8% stake in Riverstone after the sale;

b) It is reasonable to assume that the buyers (most likely sophisticated investors) have done their own due diligence. It is likely that they believe that they can still make money even when they enter at $3.95;

c) With this placement, it is likely that Riverstone’s liquidity may be boosted and may have institutionalised its equity base. With liquidity, it may be able to attract more institutions and diversify its shareholder base.

5. Vaccine may affect both sentiment and eventually demand for gloves

The discovery of a successful vaccine may affect the glove makers (not necessarily only Riverstone) in at least two ways.

a) Sentiment on glove makers will likely weaken, as funds are likely to flow to industries which benefit from a decline in Covid 19 cases;

b) If there is a successful vaccine, it is likely that countries or companies may not need to stockpile excessive glove inventory.

Based on Chart 1 below, it is apparent that Riverstone has been on a short-term downtrend evidenced by the declining short-term exponential moving averages (“EMAs”). It is noteworthy that the short term EMAs have formed bearish death crosses. In addition, the recent sell off is also accompanied with above average volumes on some days.

However, there are some encouraging signs from the chart. For example,

a) The fall on 10 Sep marks the sixth consecutive day of losses, which is Riverstone’s longest losing streak since IPO in 2006;

b) A piercing pattern has formed on 11 Sep. This usually indicates a potential reversal pattern. The accuracy of this pattern increases as Riverstone bounces off the support levels namely its 50.0% Fibonacci retracement (currently around $3.02) and 100D EMA (currently around $2.95) with good volumes;

Thus, it is likely that Riverstone may continue to go higher in the near term.

Chart 1: Formation of a Piercing pattern may indicate a potential reversal pattern

Personally, in view of the above points, I believe the recent 32% fall in Riverstone is not justified. Nevertheless, it may take some time for the market to digest the recent placement; shaky market conditions etc. Readers should be cognisant of the pros and cons in owning Riverstone shares and should exercise due diligence and independent judgement.

P.S: I have previously informed my clients on Riverstone. I am vested. Readers please visit Riverstone’s website HERE and do your own due diligence. Investments carry risk and its best to be familiar and comfortable in what you invest in.