What is so interesting about CEWL? Let’s take a closer look at its chart and other noteworthy points.

CEWL – Broke out of 2+ month trading range with volume expansion

Based on Chart 1 below, since 17 Mar 2020, CEWL has been trading sideways from $0.200 – 0.230. The bullish break today with volume expansion points to a technical measured target price of around $0.260. Out of the past six trading days, CEWL is up in those four trading days with above average 30D volume recorded on all four days.

It is assuring to see that indicators are strengthening. 20D exponential moving average (“EMA”) has just formed a golden cross with 50D SMA. ADX has been generally trending up since 21 May 2020 and last trades at 28.2, amid positively placed DIs. MACD has seen both a bullish signal line and centerline crossover. OBV and RSI are also strengthening. All in, chart looks generally bullish.

A noteworthy point is to watch is the bearish candle formed yesterday. Having said that, a stock will usually re-test its previous resistance before the next upmove. A sustained breach below $0.225 with volume expansion is likely to negate this bullish chart development.

Other interesting aspects of CEWL

For FY19, CEWL’s dividend payout ratio was approximately 25% with a historical dividend yield of 5.6%. Based on Bloomberg, FY20F dividend yield for CEWL is around 6.1%. It is noteworthy that China Everbright Group of companies typically have generous dividend yields around 6.0% or more. Readers who are keen can take a look at CEWL’s latest PowerPoint presentation slides for its AGM (click HERE).

Figure 1: CEWL’s financials at a glance 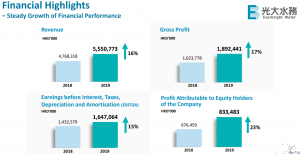 CEWL is covered by six analysts with target prices ranging from $0.240 – 0.490. Average analyst target price is around $0.400 with a potential capital upside of around 70%. Coupled with an estimated dividend yield of around 6.2%, total potential return is approximately 76%. You can view CEWL’s analyst reports HERE.

Some of the possible risk factors include but not limited to are a broad market selloff (i.e. market risk); project execution risk; S chip risk; higher leverage from expansion; forex risk, subjectivity of chart etc. For example, on market risk, excluding today, STI has appreciated more than 300 points in the past seven trading sessions. If there is a broad market selloff, almost all stocks will be affected.

The above is written on the basis of technical chart. To my best effort, I have included in some updates for CEWL so as to give you more information. As everybody is different in terms of their percentage invested, returns expectation, risk profile, investment horizon, personal market outlook etc., do exercise your independent judgement and make your own independent decisions.

P.S: I have already notified my clients to take note of CEWL on last Monday. I am vested for trading purposes only.